As occurs in many countries, in Colombia, agricultural producers tend to receive a much smaller portion of the consumer’s price than food processors and traders do. Giving small farmers the capacity to gain an additional portion of the product’s final price by adding value to agricultural produce was an initiative that BASF, the German multinational chemical company, wanted to test and implement as part of their sustainability efforts in Colombia.

BASF Colombia has been working on providing technical capacities to farmers in order to increase the sustainably of their production. Giving training on good agricultural practices, for instance, helps to increase farmers’ productivity through increased safety and quality. “If rural communities start to implement good agricultural practices and to develop programs oriented towards responsible production, they will achieve a more competitive product, while they will also be strengthened as agribusinesses” affirms Carlos Sepúlveda, consultant for the Agricultural Solutions Unit from BASF Colombia.

For BASF, it became clear that technical knowledge alone was not enough to guarantee farmers’ increased productivity. To achieve tangible results in increased productivity, there was also a need for tangible assets that would enable value addition, such as cooling, packing, and processing. In Colombia the existing solutions for on-farm aggregation and transformation are limited to large size operations, they are not reachable for small farmers. So the majority of farmers work using inappropriate facilities with no control of the temperature of harvested crops, which translates into high food losses.

After scouting globally for innovative solutions, BASF decided to pioneer InspiraFarms technology in Colombia by implementing their first on-farm aggregation pilot. The beneficiaries are the members of the farmer’s cooperative Asobosque, located in the rural area of Pasca, Cundinamarca, 70 kilometers from Bogota, Colombia’s capital. The cooperative is comprised of 390 families around the highland area of the Sumapaz moor. They produce a large range of fruit and vegetables such as potatoes, onions, peas, and berries, and also exotic fruits such as uchuva (cape gooseberry), and gulupa (passion fruit) among others.

Beyond its agricultural production, Asobosque is also well known for its actions for the ecological protection of the Sumapaz moor and for leading the development of an important highland water reservoir that supplies irrigation to more than 1500 Ha of productive land, which is especially important during the strong dry seasons produced by “El Niño” climate oscillation.

The 60m2 on-farm packhouse with integrated cold room, processing space, and hygiene areas, will initially serve as the first controlled temperature aggregation point for gulupa and blackberry production, as they are products with high local demand, but also with a potential demand from local agro-exporters. Asobosque is proud of being the first organization using InspiraFarms technology. “The support given by BASF to access high-end technology will allow us to consolidate more stable commercialization channels, which will help our associates to add value to their products”, explains Armando Romero, Asobosque’s leader representative.

The facility was concluded and delivered in March 2019 and it is expected to start operating in May 2019. Currently, Asobosque is preparing and training its team on food safety and facility management, while also engaging new off-takers. BASF will continue to support Asobosque in market access and monitor the impact generated. “The facility can be a powerful tool to add value to their harvest, to access bigger markets and reduce the intermediation, that in the end will help to increase their incomes” explains Sepúlveda. BASF plans to replicate the case by bringing more InspiraFarms units to other Colombian farmers, and also with the idea to expand to other Latin American countries, such as Peru and Ecuador. 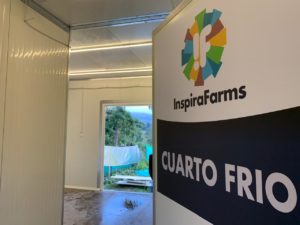 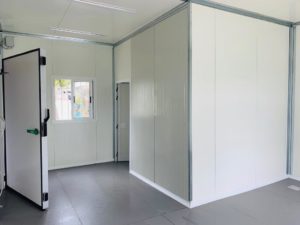